For ten years we struggled to keep deer out of the vegetable garden. Living in a quiet residential neighborhood, we hesitated to fence it in. The sunniest part of the yard is also the most visible from the street and we feared that anything deer-proof would be ugly.

In an effort to reduce our own frustration, we stopped growing the things deer like best, and every year the variety of crops got smaller. Last season the harvest was limited to kale, broccoli, cauliflower and hot peppers. I was about to give up altogether when my husband surprised me with three packs of heirloom tomato seeds.

Tomatoes were scratched off the growing list a few years back. The combination of blight, blossom end rot, and hungry deer made it an exercise in futility. But these particular seeds are supposed to be blight-resistant. I had to try!

Suddenly energized to resume the battle with the deer, we once more began our search for true deer protection. We rifled through books and scoured the internet for a solution, even calling the local fence installer for a consultation. One last time I sat down in front of the computer.

Lo and behold, I found something that just might keep the deer out of the garden

GardensToGro.com – their slogan is “ready-made vegetable gardens” – have an entire selection of fenced and gated gardens. Some even claim to be deer-proof. The gardens are available as complete kits, or you can buy the plans and purchase the lumber yourself.

We priced out the options. The plans-only option recommends using redwood or cedar. Redwood is not available in our area, and cedar is expensive. We even considered buying pressure-treated lumber. But in the end, after much discussion, we decided to purchase the complete kit. The company claimed we would receive it within 3 weeks, and it would take 2-4 hours to assemble.

We chose the 8’x12’ deer-proof vegetable garden kit pictured below, which is manufactured by Maine Kitchen Gardens. The raised beds are in a C shape, with the gate on the long side. It has 65 square feet of raised bed planting space, about half what we had before. The structure of the garden is as follows: directly above the raised beds is a heavy-duty black metal mesh about 10″ tall, and the 4′ upper trellis is backed with black netting. 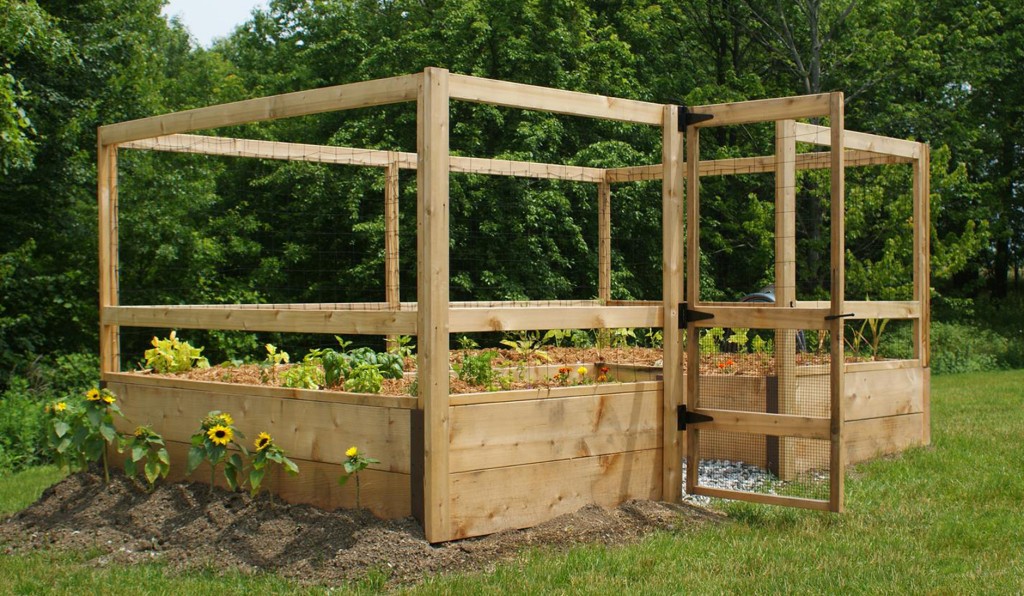 Our next task: reconstruct the old raised beds. We would plant the things deer like best in the new freestanding garden enclosure. Plants less likely to be eaten by wildlife would be planted in the reconstructed, unprotected beds.

By repurposing the wood from two 4’x10’x10” and two 5’x10’x10” beds, we created two 4’x10’x20” beds, using 20″ raised bed corner brackets, also purchased from Gardens to Gro. That was the easy part. Next we had to transfer the soil from the old beds into the new raised beds. It was backbreaking work shoveling the soil into a wheelbarrow, rolling it over to the beds, and then shoveling it all back in.

About six weeks after ordering, the Deer-Proof Vegetable Garden Kit arrived. It was in quite a state. Clearly something awful happened to the crate in transit. Some of the packing straps were still intact, and the kit was still bound together, but the plywood crate was broken open and the kit was loose inside. We immediately emailed our contacts at Gardens to Gro and Maine Kitchen Gardens. They thanked us for sending the photos and asked us to keep in touch. Furthermore, they offered to immediately replace any parts that were missing or damaged. 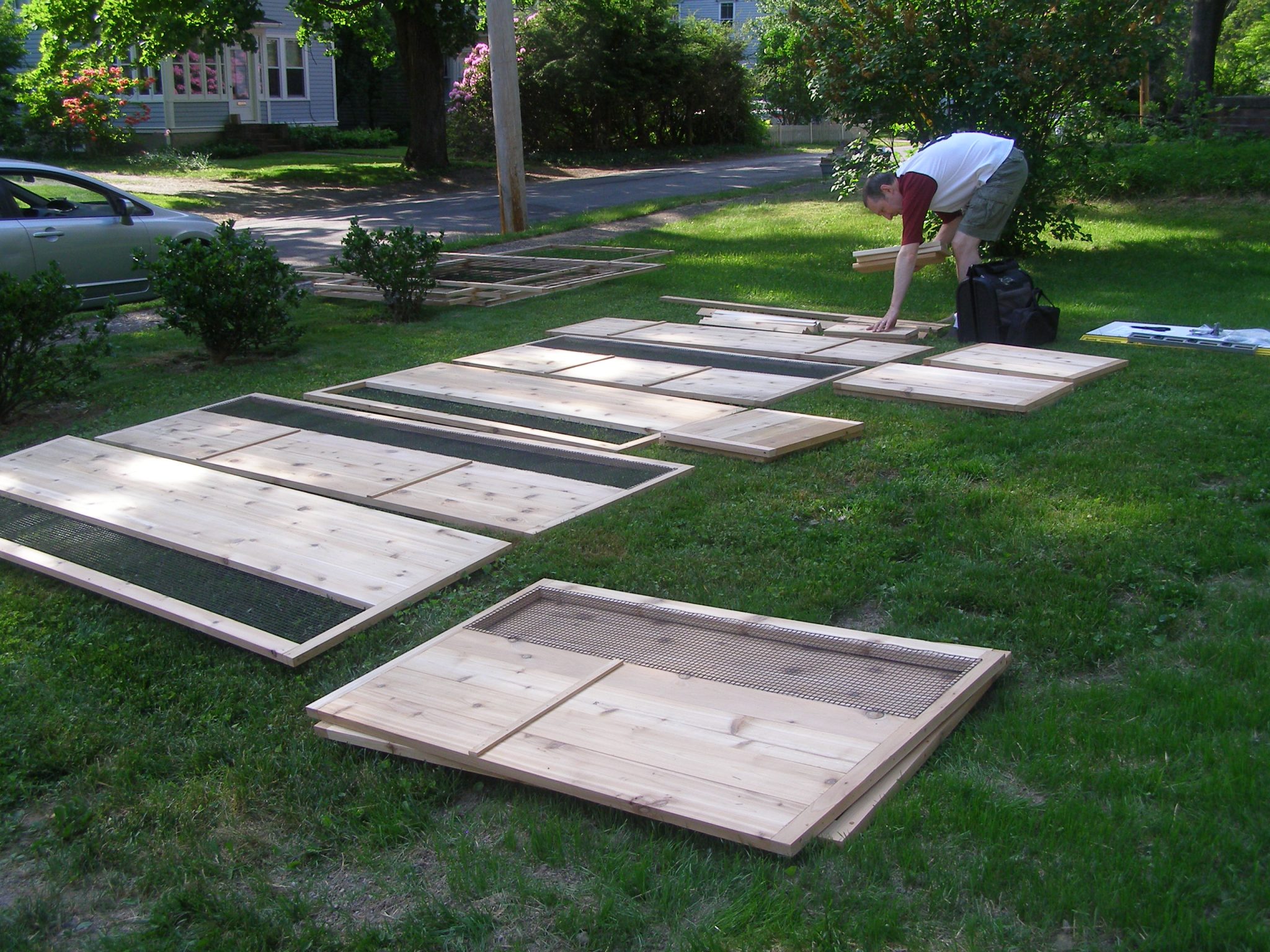 First, we set out all the pieces to confirm that nothing was missing or damaged. Thankfully, everything appeared to be okay. All the pieces were present and the damage was essentially cosmetic.

Next we started putting the kit together. We carefully followed the directions that came with the kit, checking frequently for level and square. It’s definitely a two-person job, at least at the beginning. We inserted all the screws loosely at first, to allow for adjustments, before tightening them all at the end. Phase one ends when the raised beds are complete. 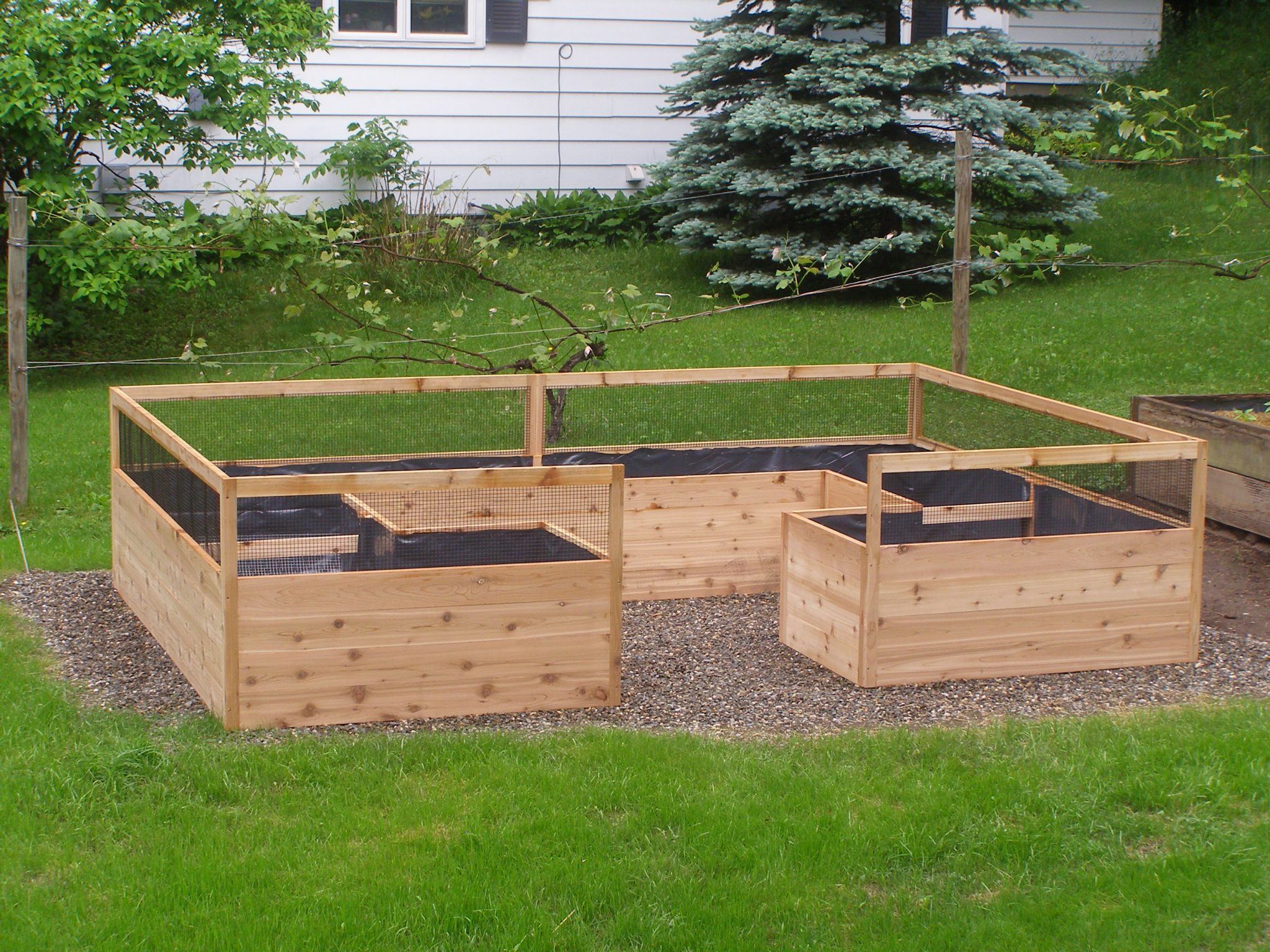 After completing the raised beds, we laid 6 mil black plastic out on the lawn and cut it into 18”x25’ strips. We stapled the strips to the inner vertical surface of the beds to keep the wood from being in direct contact with the soil, in the hope that it will last longer that way. Then we laid galvanized steel hardware cloth on the ground inside the raised beds to keep out moles and other burrowing rodents. The hardware cloth is about 6” wider than the inner width of the beds. We pushed it down in the middle to lie on the ground, allowing it to curl up 3″ against each side. 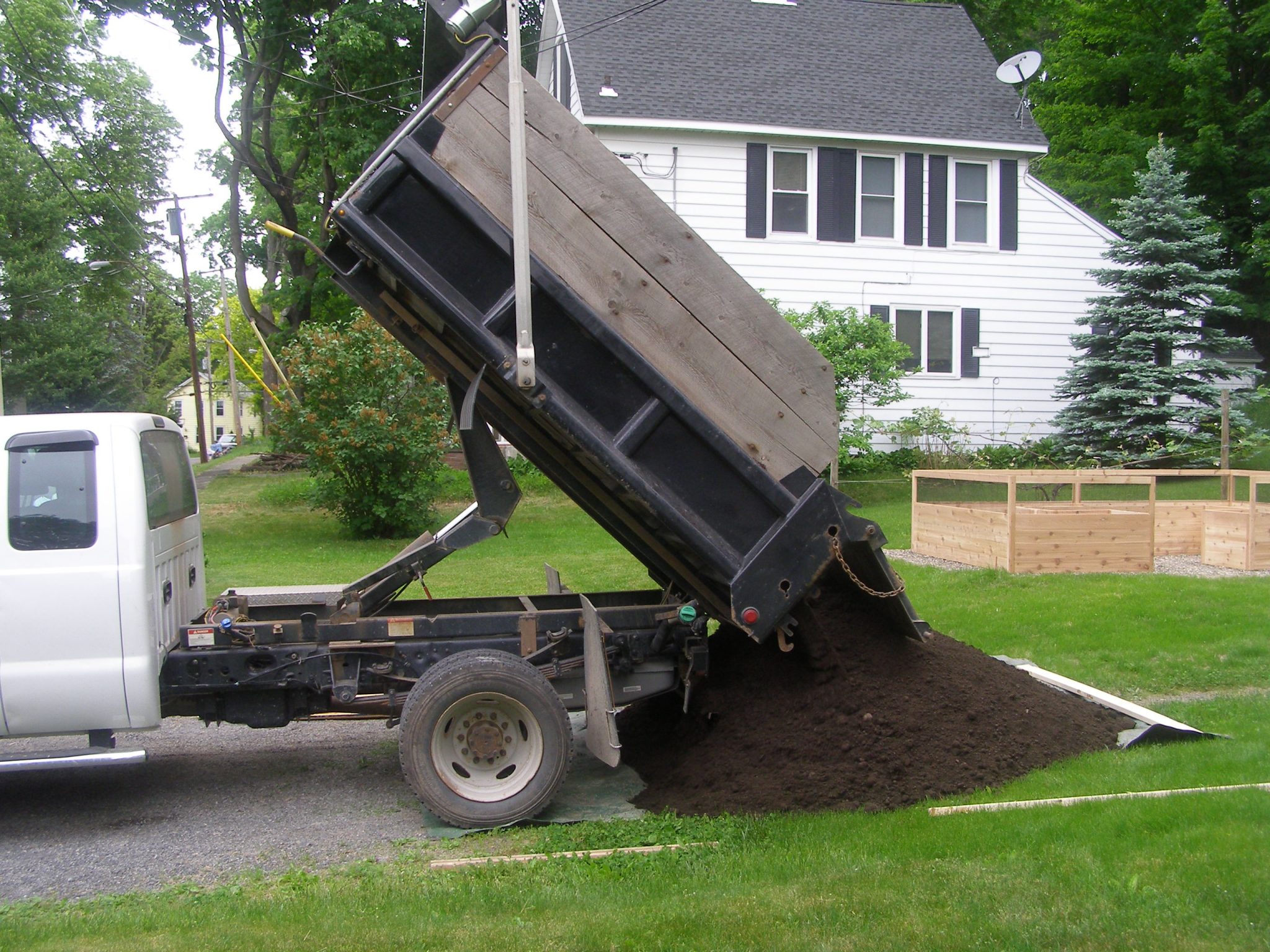 The next step was to fill the beds with soil.

We laid two large tarps on the ground and had four yards of raised bed mix delivered. Hudson Valley Organics mixes their own by combining soil with compost and a mix of composted manures. This time we had a new method for moving the soil. Landscape architect Wendy P. Carroll instructed us in the correct technique, and it was a godsend. It saved us hours of work and it was much less physically demanding.

What was the trick? 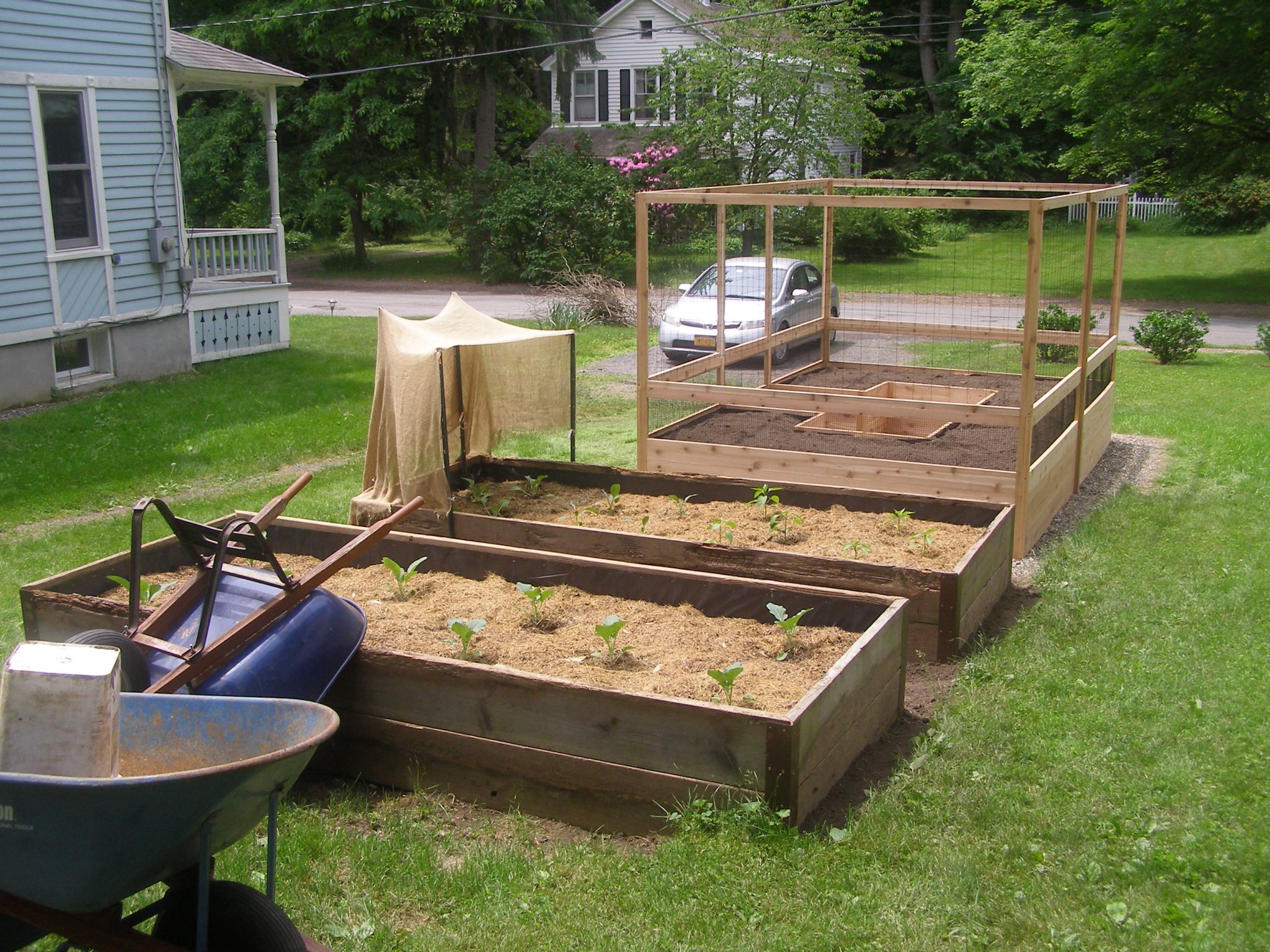 The final phase of assembly is to attach the 4′ trellis around the top of the raised beds, for a total height of 6’9″, and hang the gate. These structural elements are what make the garden deer-proof. Although a running deer can clear a 7′ fence, the idea is that they will not choose to leap into a small, enclosed area, because they would have trouble getting out again.

Our Deer-Proof Vegetable Garden Kit by Maine Kitchen Gardens, purchased from Gardens to Gro, has been standing for a little over a week now. It looks beautiful and it is such a pleasure to work in. The raised beds reduce the amount of strenuous bending. Transplanting the things that I had started from seed and adding the plants purchased locally was so easy. In addition, setting the 5’ metal tomato stakes was like running a knife through butter. I didn’t have to worry about hitting rocks and I didn’t even need a shovel! 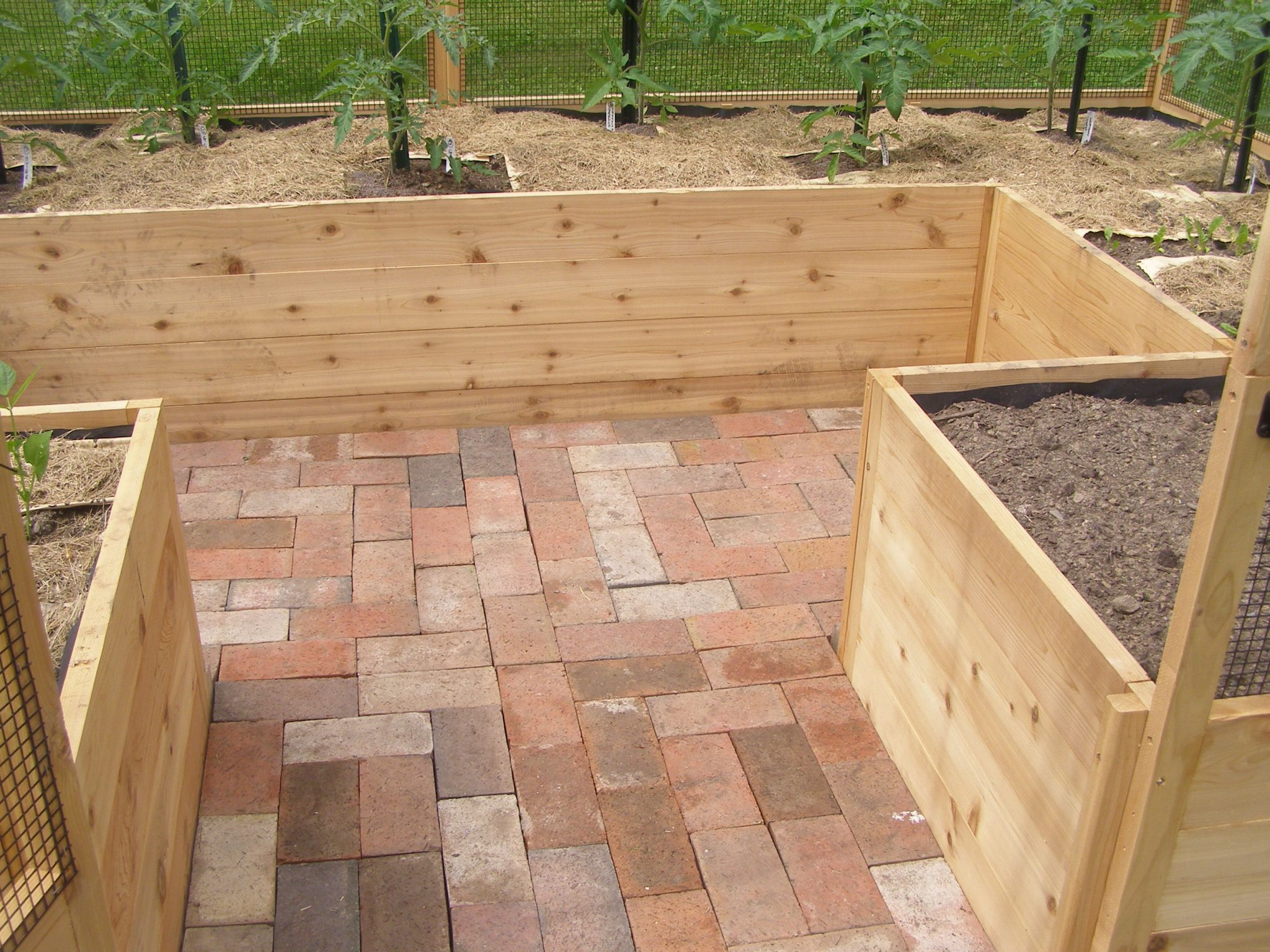 The final step was to lay some used brick we acquired over the pea stone base. This certainly wasn’t necessary but we had the materials on hand.

The hard work is over

Time will tell how well the garden holds up, and if it’ll really keep the deer out. I wonder if the wood will split or rot, and how difficult it will be to replace a single panel. We’ll just have to wait and see. For now, I couldn’t be happier.